I always check ahead of time on best ways (cheapest)to get to the city from the airport and discovered that Ulaanbaatar had both regular taxis and entrepreneurial drivers with prices  anywhere from $8 to $20.  I was bombarded with offers upon leaving customs but I still needed to change money.  One driver patiently waited and agreed to the lowest fare.  He escorted me out to his waiting Prius.  I was quite surprised but even more so when I noticed that almost every other car was one.

Given the popularity of this vehicle the terrible pollution offending both my eyes and nose was unexpected.  We passed the city’s power plants spewing coal dust (combustion residuals) and I guessed that was the problem.  Later I discovered that the real issue was the number of people who had moved close to the city due to economic and climate change and used coal and wood burning stoves in their gers for heat and cooking.  According to WHO this is the cause of  80% of Ulaanbaatar’s pollution. 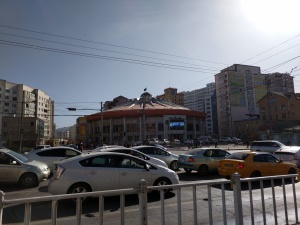 About those Prii (supposedly the correct plural form of the car Prius) and why they are the unofficial Mongolian car. First of all, they are relatively cheap as Mongolia does not charge excise or air pollution tax on them and most are used cars from Japan and have the steering wheel on the right side. Secondly, this car always starts even in the cold harsh winters.

I have now visited over 100 Countries and hope to add at least 5 every year.
View all posts by Agingadventurer →
This entry was posted in travel and tagged gers, Mongolia, pollution, Prii, Prius, taxi, UlaanBataar. Bookmark the permalink.