Posted on January 15, 2015 by Agingadventurer

I was facing a 10 hour train trip from Bucharest to Sofia in a filthy stench filled, eye burning car with toilet facilities that rats would avoid. Once across the border, four Bulgarian women commandeered my compartment. The matriarch looked to be in her 80′s and the other three could possibly have been her granddaughters. While they appeared friendly, there was a danger lurking in that now crowded space. 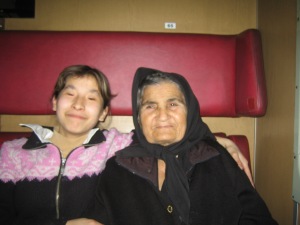 Normally younger people have been taught some English in school but I quickly determined that while these ladies knew many things, English was not one of them.
Within minutes I was scrutinized via universal sign language about my lack of travel companions, about where I was from, and about money. As they furtively chattered among themselves, I gathered that they were choosing which course of action to take with me. The fact that I had purchased a first class rail pass for countries that did not offer that service proved that I was a fairly easy target.

I pretended to read my book as they ostensibly discussed me while eating their lunch. I refused to acknowledge that I was being asked for money even when the old woman put her bandaged feet on my lap to exhibit her desperation.

I struggled with my intuition. Was I being paranoid? Was I just imagining that these women were gypsies who were looking for immediate gratification? As I crawled deeper into my small corner I realized that I could not even go to the toilet and leave my backpack behind. Instead, I sat there, uneasily battling my need for safety with making a possible un-PC judgment.

Within a few hours time the conductor came by and asked me rather bluntly, “what are you doing in here with them? Go and sit anywhere but here.” I was out of there so fast that he had to grab my bag for me. 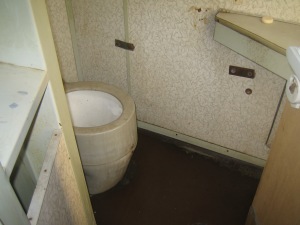 Despite my newfound safety, I still had difficulties making myself use those unsanitary toilet facilities!

I have now visited over 100 Countries and hope to add at least 5 every year.
View all posts by Agingadventurer →
This entry was posted in travel and tagged backpacking, Eurorail pass, Gypsies, Romania, train travel. Bookmark the permalink.

2 Responses to Rough Ride from Romania