Before leaving I read an account of how millions of dollars of foreign aid to Haiti, after both the 2010 earthquake and the 2016 hurricane, were not spent wisely so I knew not to expect to see a country in recovery.  I soon discovered a gross understatement of any relief success.  After a couple of hours I was ready to leave.  My hotel room was not ready and I was told to wait  there because it was not safe for me to go “exploring” alone.  So I was forced to spend a couple of hours in their patio restaurant with a sandwich and bottle of water at high resort prices. 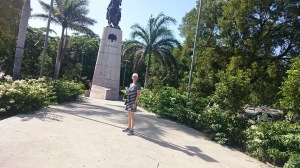 Later I was able to hire a local guide to walk with me through the city. Jean was originally from Uganda but had lived in Haiti for years. He showed me the scars on his head where he was hit with falling bricks and was most gallant in leading me through the ravaged neighborhoods making certain he was on my outside navigating through traffic and then again when some men on a corner made some, what I assumed to be, disparaging remarks about me.

There is no traffic control and the huge potholes are the least of their problems. When a gust of wind hits it’s not dust that flies up, it’s dirt and garbage. There are make shift shacks everywhere and the famous iron market runs around and through the area. 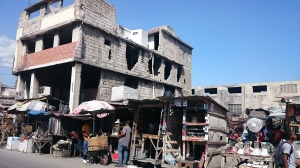 I had an opportunity to talk with various aid workers, volunteers and directors of projects. While I have no expertise in how to solve any of the problems facing the Haitians nor do I speak Creole or French, I was amazed with the people’s fortitude and ability to survive in such conditions. 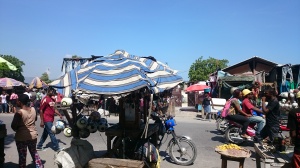 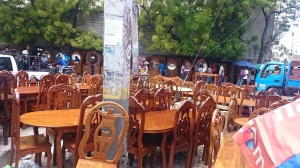 My observations confirmed what I had read about misspent funds, NGO’s not knowing how to best help, and countries like the U.S. hiring their own companies to do the work even though they didn’t speak the language or know who to trust.  A representative of Alnap, an international network of humanitarian agencies explained that:                       “The coping strategies of local people were overlooked. Opportunities to support local businesses were missed and this explains the mixed reception foreign humanitarians get in the country. With an estimated 10,000 non-governmental organisations operating there, locals ironically refer to Haiti as an “NGO republic”.

Seven years later the country has little to show for the billions of foreign cash  received and the economy  doesn’t show any signs of improving. However there are a few areas of Haiti that exhibit a different lifestyle like the hillside suburb of Petion-Ville with its beauty salons, fitness gyms and restaurants as well as the private cruise ship port at Labadee.

I have now visited over 100 Countries and hope to add at least 5 every year.
View all posts by Agingadventurer →
This entry was posted in travel and tagged foreign aid, Haiti, NGO, Port au Prince, poverty. Bookmark the permalink.