Posted on May 6, 2019 by Agingadventurer

My last trip was most notable for the time spent in airports between flights.  First I had 12 hours at JFK and then 6 hours in AMS.  So, two days to get there! I was looking forward to seeing the new AMEX lounge in New York but unfortunately it was behind schedule by months and not opened as promised. Luckily I had a back-up with my Delta Lounge access.

Two of their best features include the Asanda Spa and their new food and beverages.  I love that I can spend miles instead of dollars.  I upgraded from the free wine offering and had a 50 minute massage!  All with miles.  I also had time to read a book, nap, shower and do a couple of miles walking through all the terminals.  Some airports actually have a movie theater (Singapore, Minneapolis, Hong Kong).

In Amsterdam my Delta pass failed and I was not admitted to a lounge so a plan B was needed.  As both my flight from San Diego to New York and the one from New York to Amsterdam were red-eyes, sleep was much-needed. I discovered YotelAir.  Their cabins rent by the hour, include fast internet, coffee or tea, a bed and a shower.  It cost about the same as access to a paid lounge.  So I opted for sleep instead of liquor! 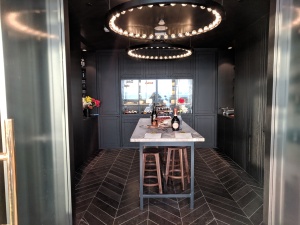 On my return through AMS I was able to get access to the KLM lounge even as they were remodeling.  What an incredible experience they are offering…both one for those who are okay with normal and one for those opting for the primo treatment (fee attached). These extras include a restaurant, sky bar with premium drinks, nap compartments and a wine and cheese bar. These lounges are destinations in themselves!

I have now visited over 100 Countries and hope to add at least 5 every year.
View all posts by Agingadventurer →
This entry was posted in travel and tagged airports, Amsterdam, Asanda Spa. Delta Sky Club, JFK, KLM, Yotel. Bookmark the permalink.